Closing the gender gap in technology, one girl at a time. 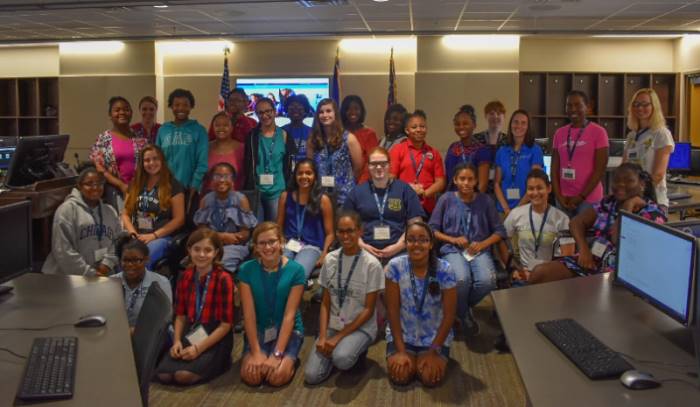 "CodeHoppers" is an after-school club for middle and high school aged girls (ages 6th-12th grades) to explore computer science in a fun and friendly environment. No previous experience is required. We welcome all eligible applicants who have an interest in technology and a willingness to learn!

Why are our girls called "CodeHoppers"?

Our club is named after one of the most influential tech pioneers in the computer science industry, Rear Admiral Grace Hopper. Hopper, one of the first women to obtain a PhD in Mathematics, created a compiler that was a precursor to the COBOL (Common Business Oriented Language) programming language while serving in the United States Navy. In 2016, Hopper was posthumously awarded the Presidential Medal of Freedom for her contributions to the computing industry. Shortly following her death in 1992, computer scientist Anita Borg co-founded the "Grace Hopper Celebration", a gathering to highlight the contributions of women in computing. We are so grateful for Admiral Hopper and the trailblazer she was for girls in our industry! Photo from Vassar College.

Congratulations to our head volunteer, Julianna Rodriguez! Julianna was named Augusta University's Volunteer of the Year in 2020.

Rodriguez serves our country by day as an active-duty Lieutenant Colonel in the U.S. Army, stationed at Fort Gordon. By night, Rodriguez serves the young people in our community by encouraging young women to pursue a career in STEM through our Girls Who Code club.

Thanks to Julianna's motivation, resilience and her desire to encourage other women to pursue cyber, she has been with our team from the beginning since our club's founding in 2017 and has played an integral role in the curriculum creation for club meetings. Since our club's beginning, Julianna and the incredible volunteers she has brought from Fort Gordon have helped inspire over 100 girls in the CSRA!

Augusta University is grateful for Julianna's desire to serve and make a difference in the lives of young women in the CSRA. Thank you, Lt. Col. Rodriguez for your service to our country and the future of our industry!

"[Julianna's] depth of knowledge in computer science and engineering, and her contagious enthusiasm, is exactly what is needed to inspire girls, to encourage them to take first steps into the world of computing, and to motivate them to consider careers in computing.”

- Dr. Alex Schwarzmann, Dean of the School of Computer and Cyber Sciences

Girls Who Code at Augusta University

School of Computer and Cyber Sciences

When do the CodeHoppers meet?

Who is eligible to attend CodeHoppers?

How much does it cost to attend CodeHopper meetings?

There is no cost to attend CodeHoppers, just a commitment to attend meetings.

Where do the CodeHoppers meet?

CodeHoppers meet at the Cyber Institute's headquarters on the Summerville campus of Augusta University:

I'm interested in investing in the future of females in computer science. How can I support CodeHoppers?

Thank you so much for your interest in supporting our girls! Please email codehoppers@augusta.edu and we'll be in touch with further information.

Will CodeHoppers continue this year due to the COVID-19 pandemic?

We miss gathering with all of you! Stay tuned for more information to come on future CodeHoppers meetings.

Come learn to code and change the world with us.

Applications coming soon for our next Girls Who Code cohort!