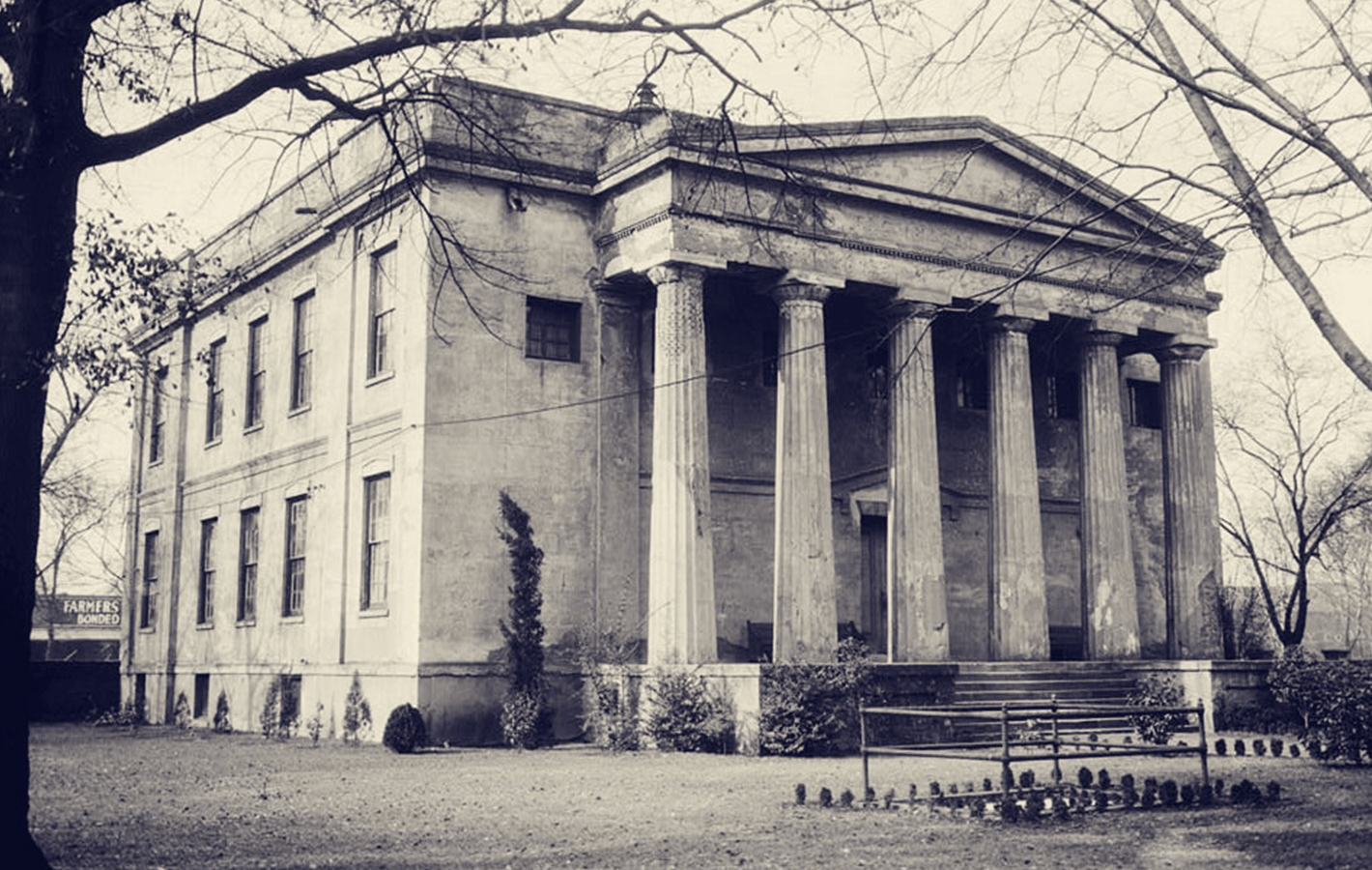 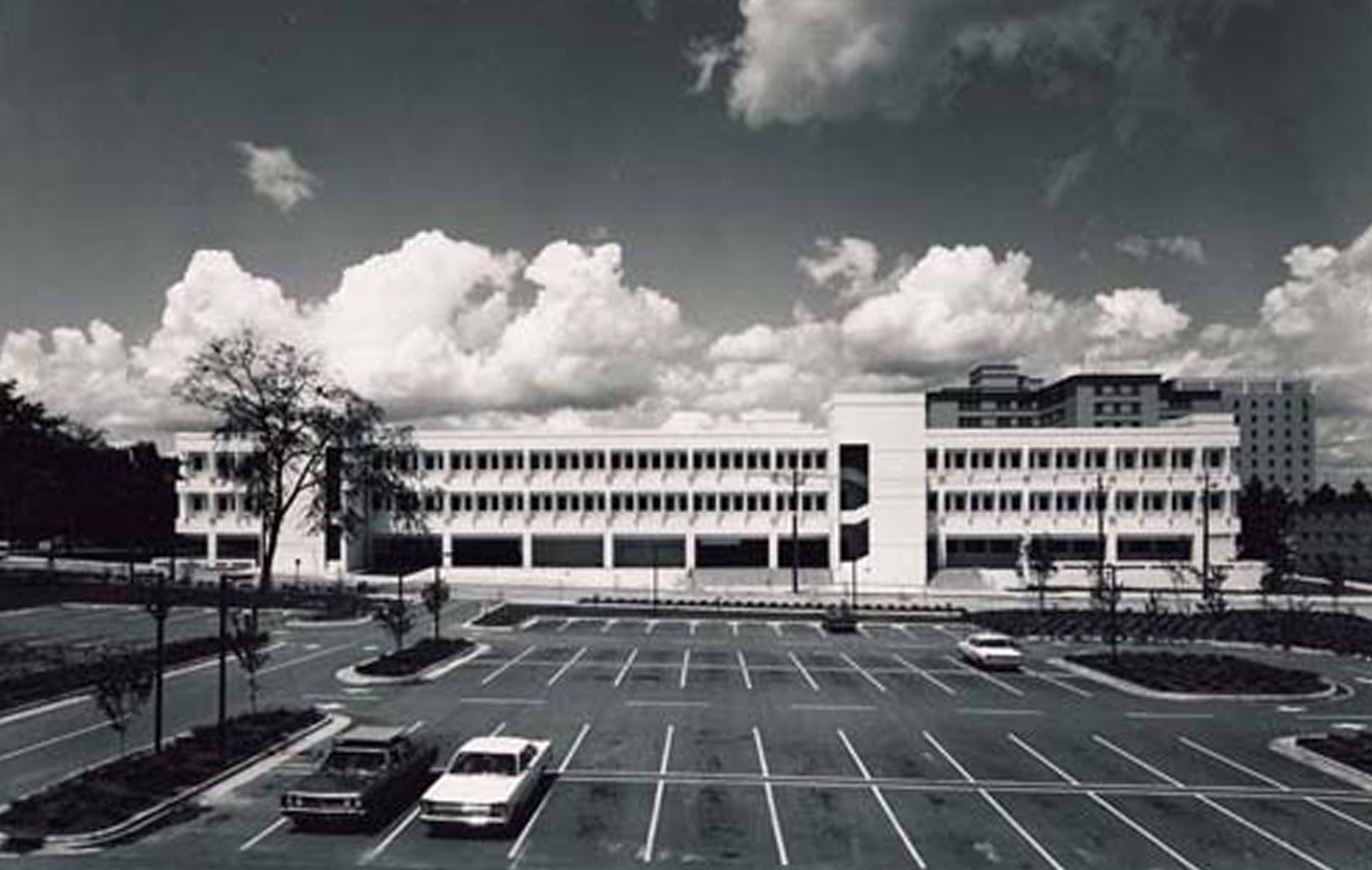 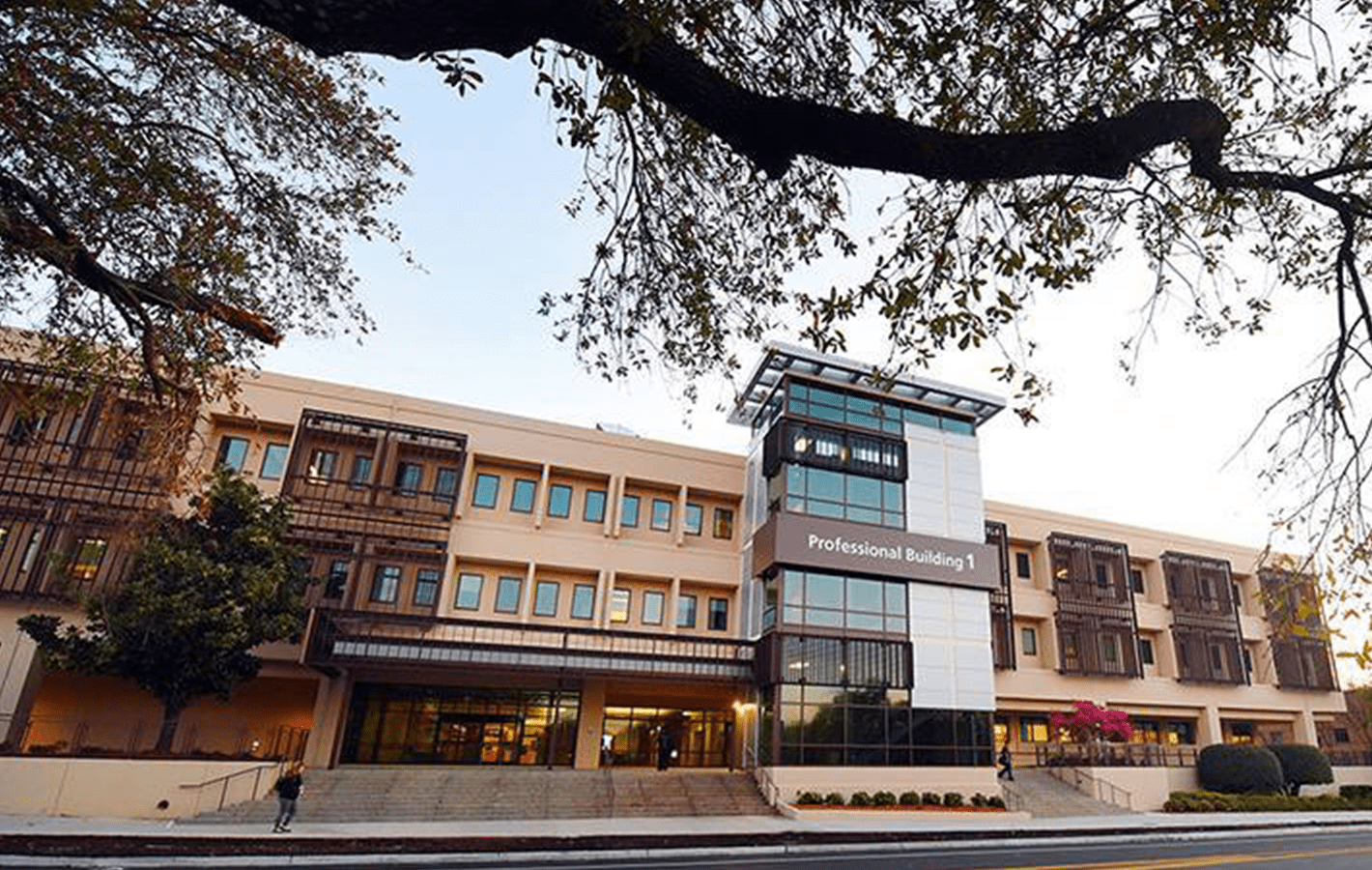 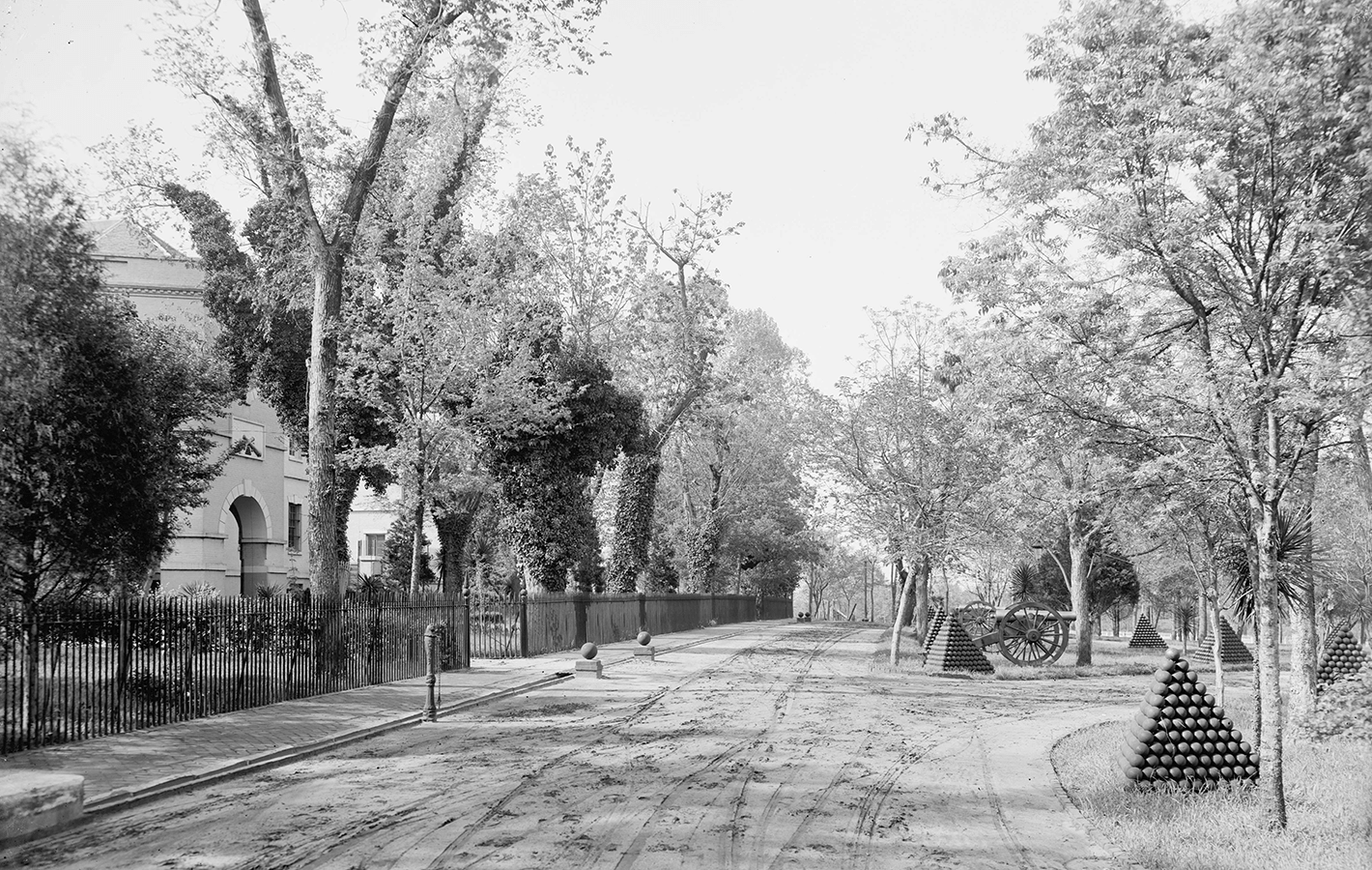 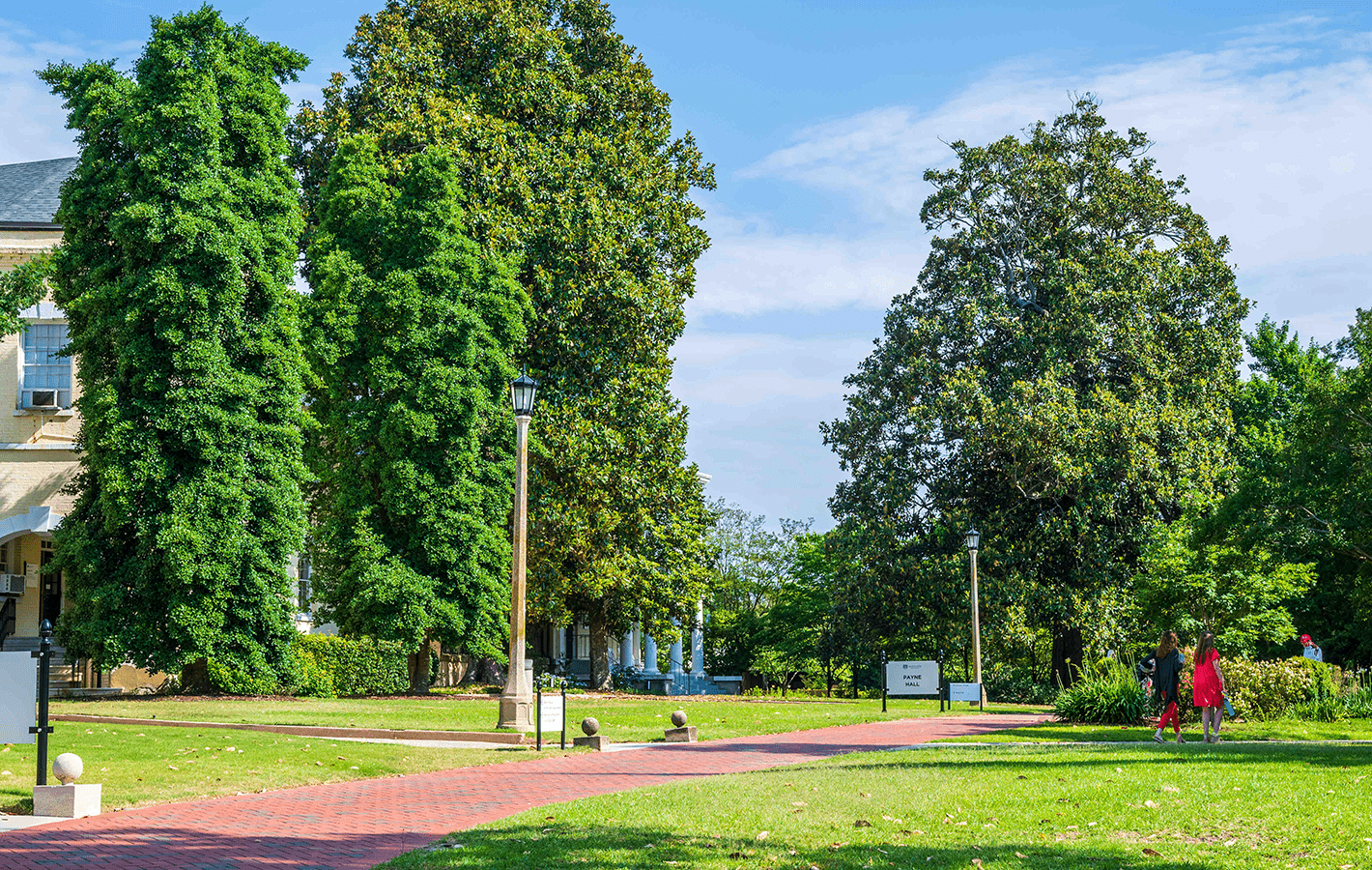 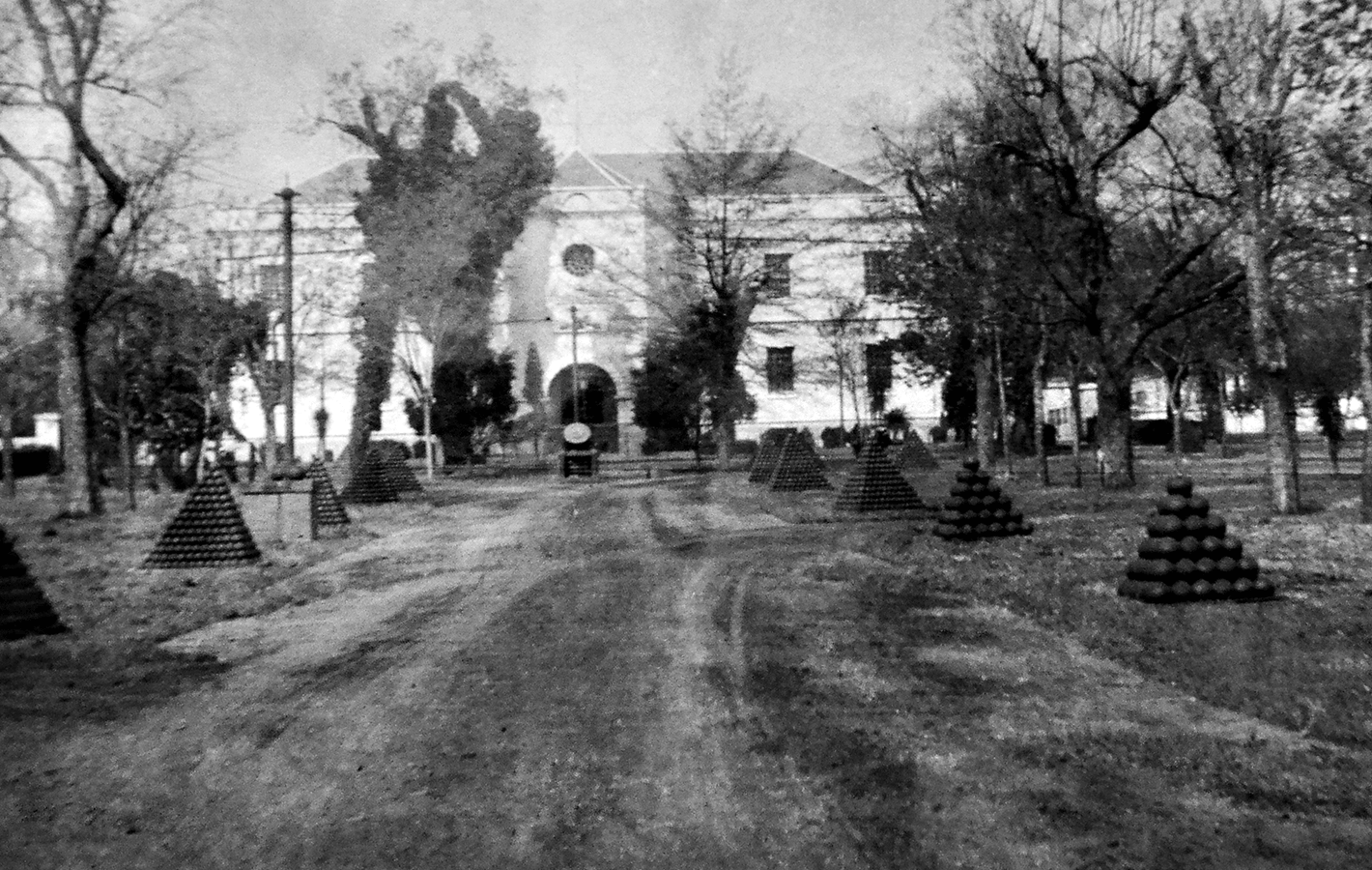 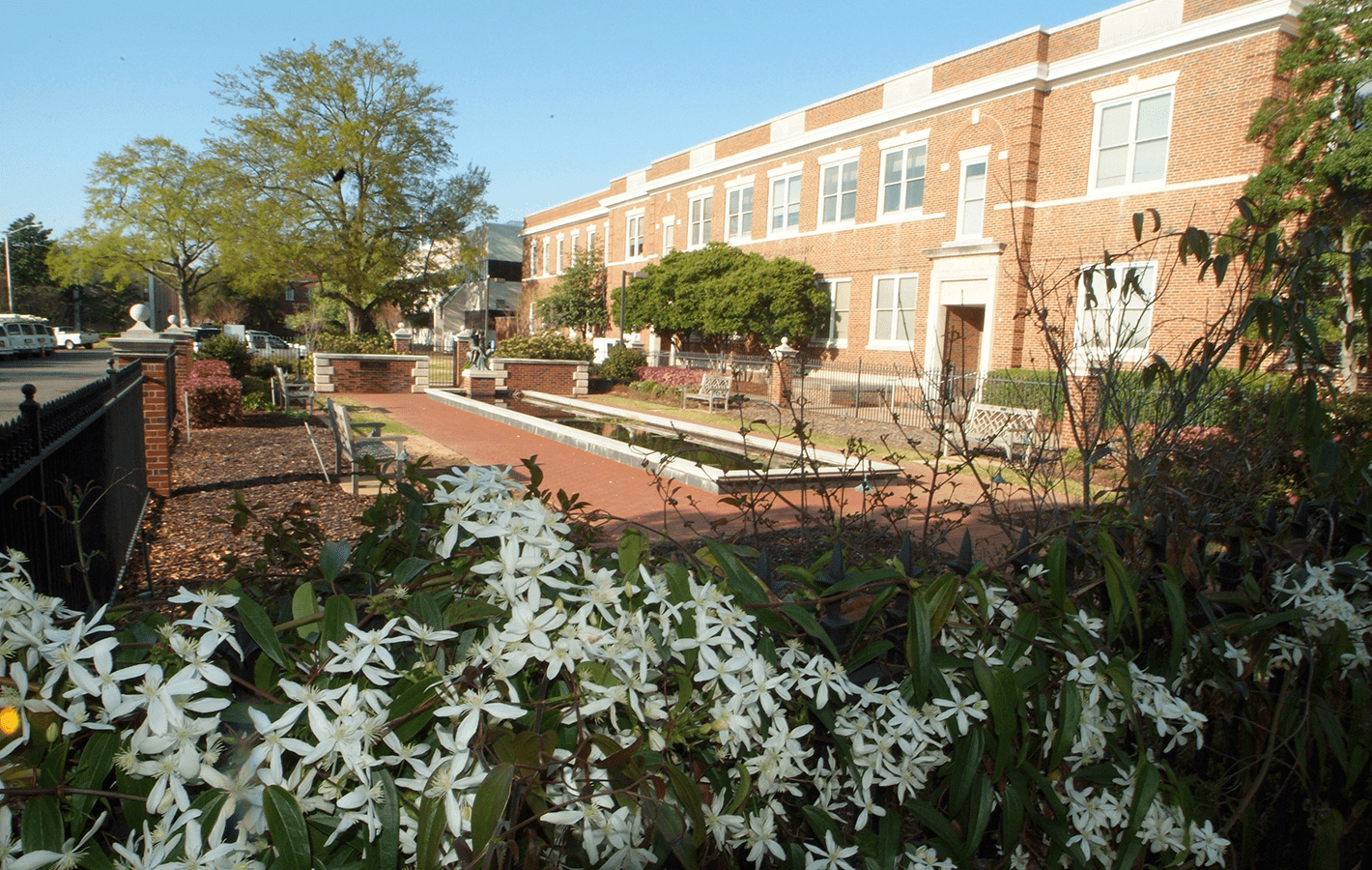 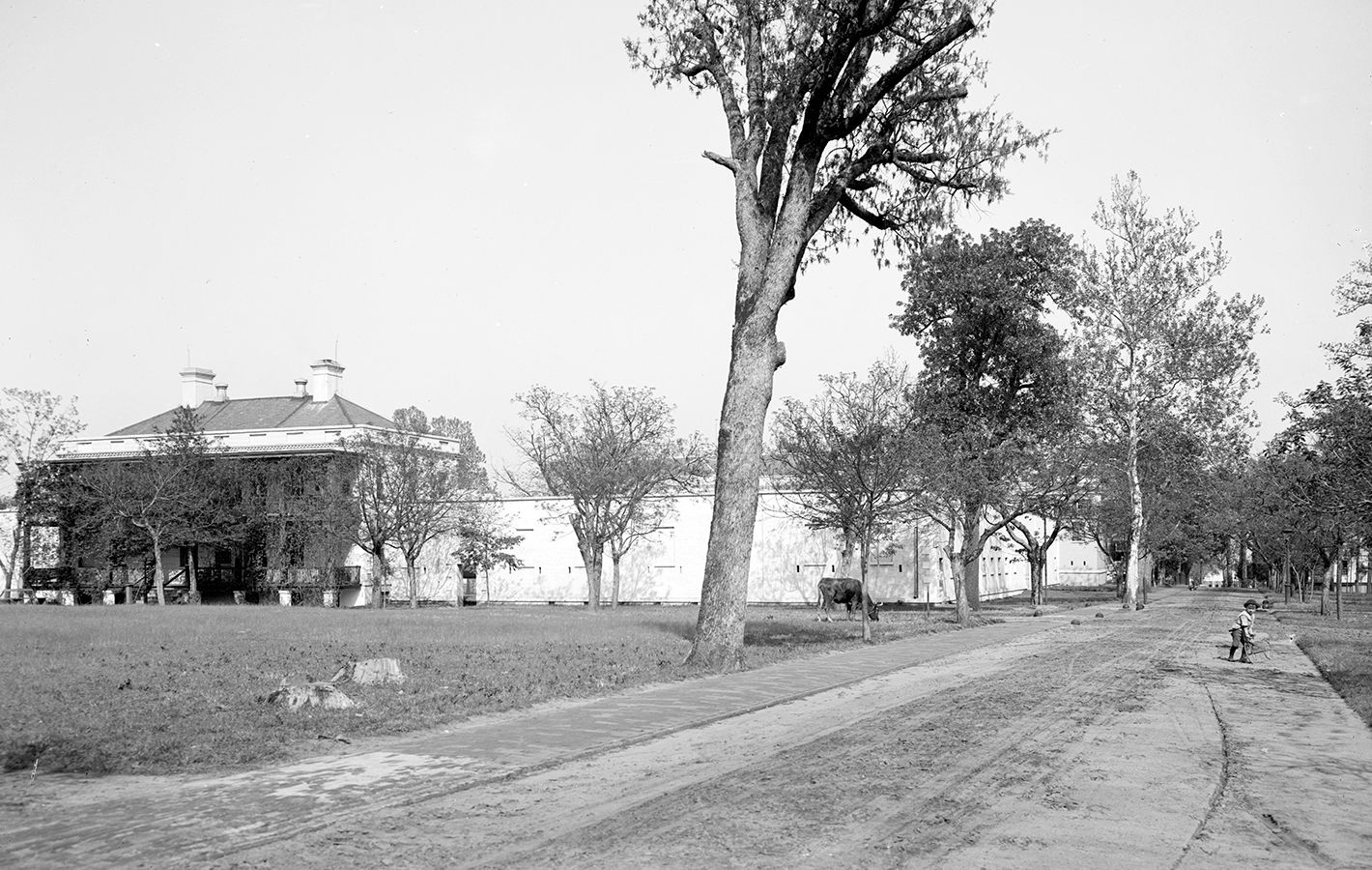 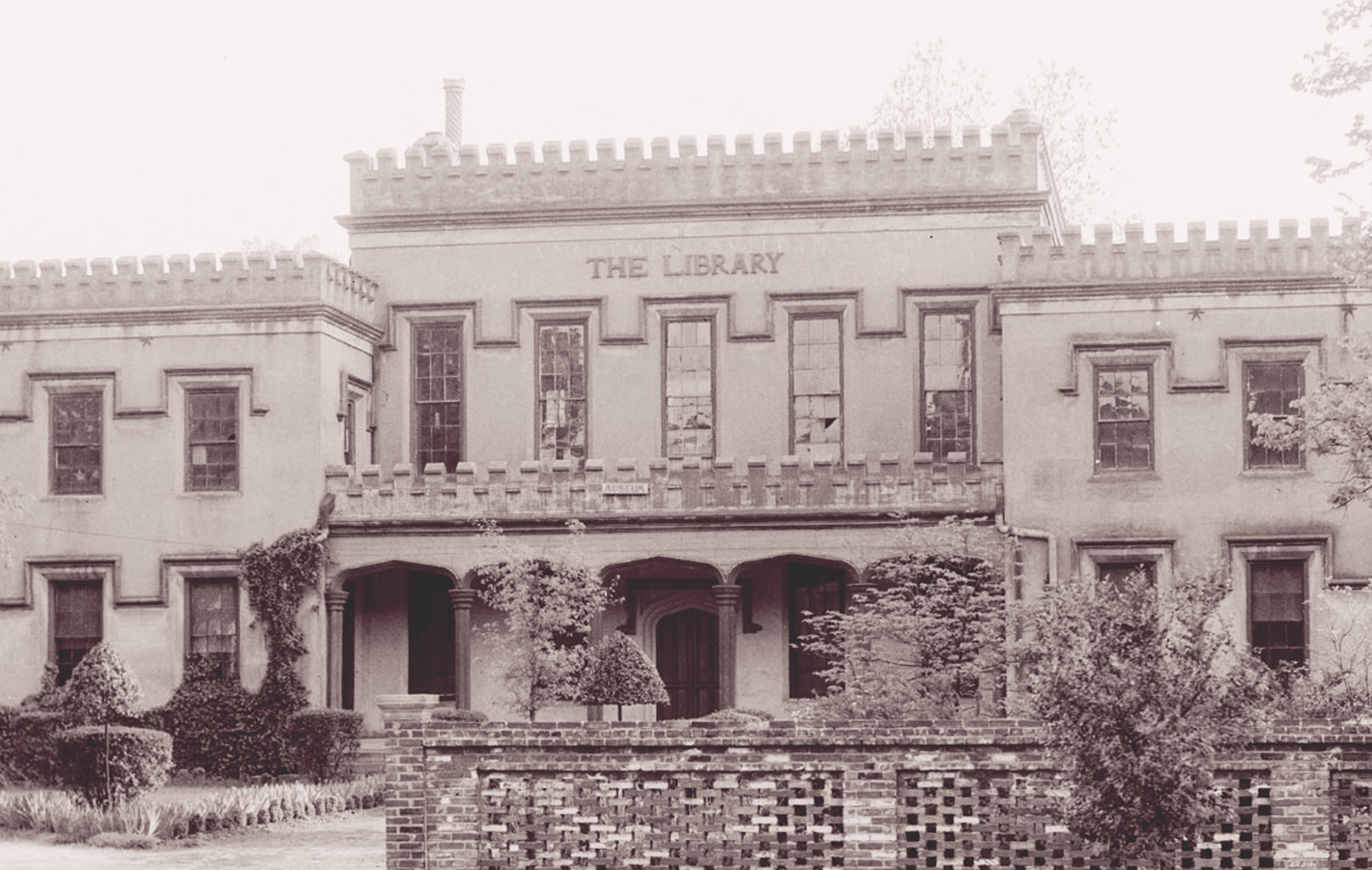 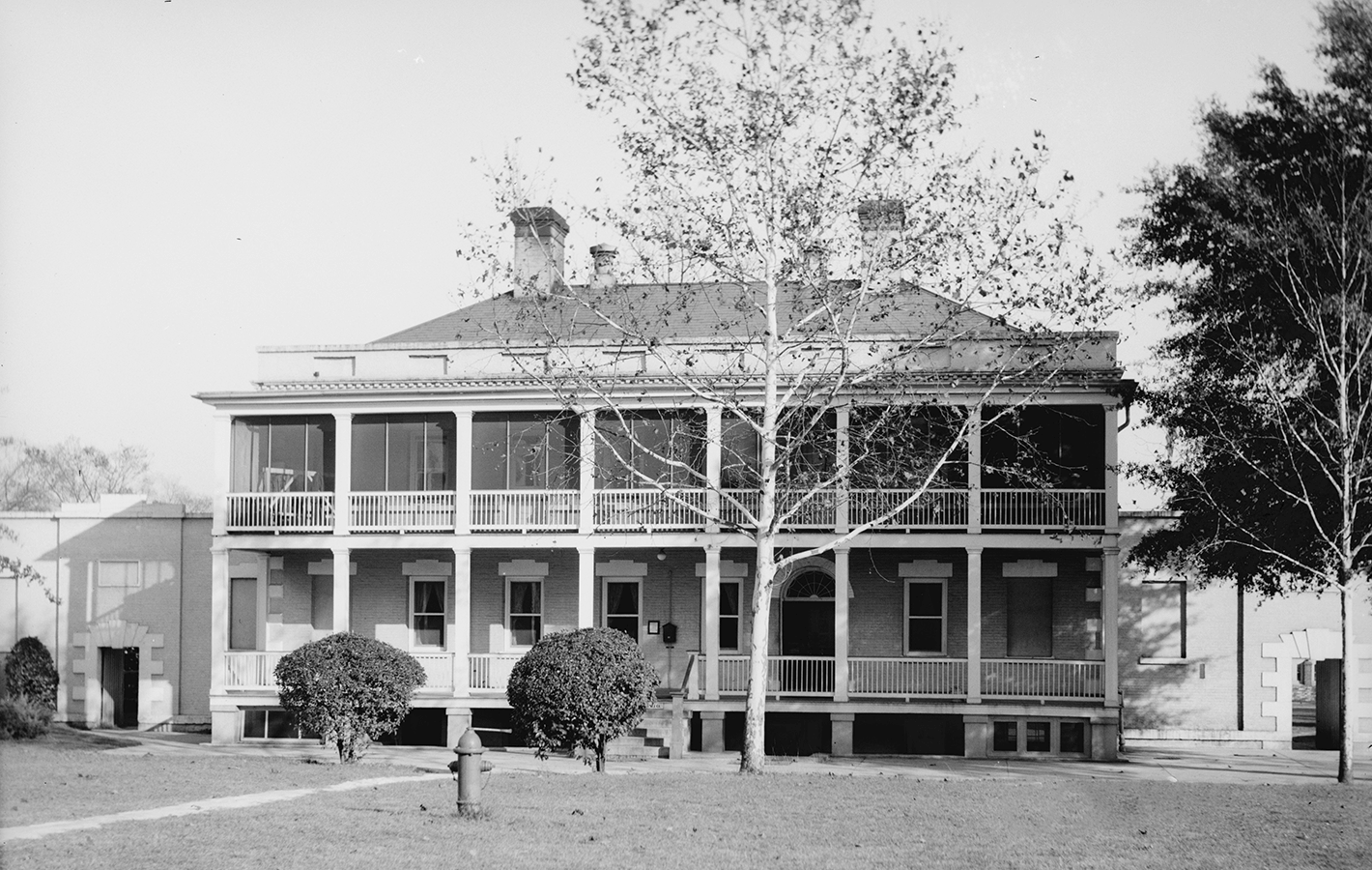 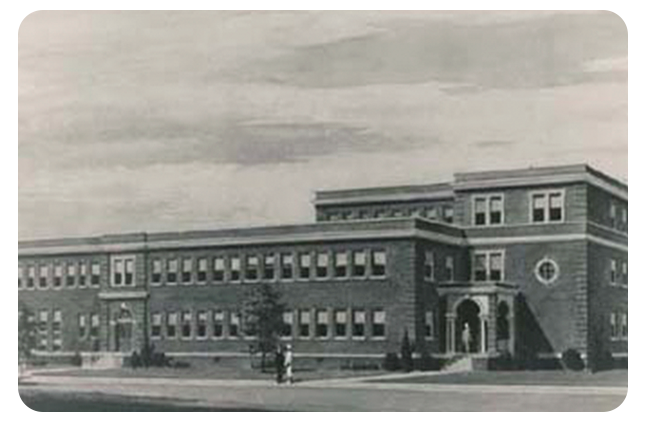 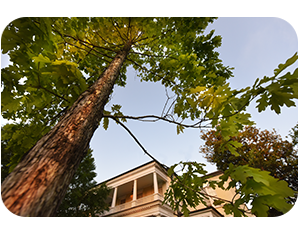 On December 10, 1828, Augusta University’s history began with the official founding of the Medical College of Georgia.

As the city of Augusta continued to grow and expand over the centuries to meet the needs of the community, other institutions were born, with each creating their own legacy.

In 1996, Augusta College acquired university status as Augusta State University. In 2011, MCG became Georgia Health Sciences University to reflect its broad mission in many fields of health sciences. Both schools had expanded programs to meet the education needs of the rapidly changing society of the late 20th/early 21st century. Building on the legacies of its parent institutions, in 2013, the two universities became one.

On December 1, 2015, that one became Augusta University.

Dr. Margaret Wong Mola was admitted to MCG’s School of Medicine in 1943 — one of only five women admitted that year — and became MCG’s first Asian American student.

Trailblazers: First women of Medical College of Georgia set the tone for generations to come

Though many of the first women at MCG were doubted at some point, each of these graduates helped pave the way for women pursuing medical degrees today.

Listen: Hear from the first women graduates of MCG on ‘In the Wild’

The first women of MCG are heard on a very special episode of In the Wild podcast.

Listen: MCG trailblazers reflect on their experiences during desegregation

To celebrate Black History Month and honor our AU trailblazers, Drs. Joseph Hobbs and Ronald Spearman share their stories and their legacy of attending the Medical College of Georgia during desegregation.

In 1791, when President George Washington attended the examinations at the Academy of Richmond County, the school offered post-secondary studies in Latin, French, Greek, algebra and trigonometry to prepare students for transfer to universities as sophomores. This year of college work was the beginning of higher education in Augusta.

In the early 19th century, the seeds of medical education were also germinating. In 1817, the city established a board to oversee the health problems facing the town. The next year, on property purchased from the Trustees of the Academy, a 10-bed City Hospital was constructed.

In 1822, Dr. Milton Antony and seven physicians organized the Medical Society of Augusta to improve health care and physician education. Four years later, Antony began instructing students in the City Hospital, joined the following year by Dr. Joseph Adams Eve. In 1828, the two physicians secured a state charter to establish the Medical Academy of Georgia, which could award Bachelor of Medicine degrees. The General Assembly revised the 1828 charter, changing the name to the Medical Institute of Georgia, and in 1833, to the Medical College of Georgia to more accurately reflect its true mission and status. MCG moved into a grand new building on Telfair St. in 1835, on property adjoining the Academy. 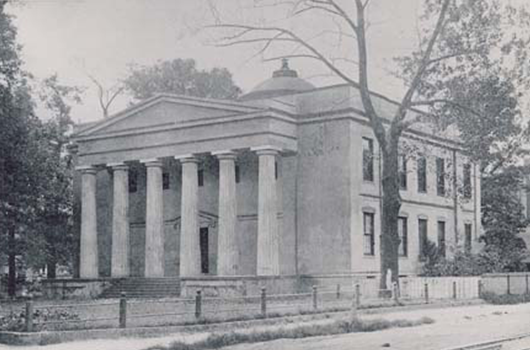 When the Civil War began in 1861, both institutions suspended classes as faculty and students took roles in the war efforts. ARC’s building became a hospital, and the MCG building became surgeons’ quarters, with its amphitheater serving as an operating room. When the war ended in 1865, MCG resumed classes, although ARC served as headquarters for federal troops for two more years before resuming operation.

In 1867, Col. George Washington Rains, the Confederate commandant of the Augusta Arsenal and the Augusta Powder Works, was asked to reopen ARC. He became regent (headmaster) and established a new Scientific Department. ARC students could attend his classes at MCG, where Rains also taught chemistry. In 1873, MCG became loosely affiliated with the University of Georgia as its Medical Department and in 1880, Rains became dean (president) of MCG and served until 1884.

Augustans boasted that it was the only high school in the state offering college credit. In 1912, legislation officially made MCG the Medical Department of UGA and the institution moved to a new campus in January 1913.

As the national junior college movement gained momentum, ARC’s fifth year evolved in 1925 into the first chartered junior college in the state—the Junior College of Augusta. The following year, ARC and the JCA moved to a new location on Baker Avenue, where they would share space for the next 31 years. The Medical College of Georgia was also evolving. New facilities advanced its academic, research and clinical care mission. When the University System of Georgia was created in 1932, it absorbed control of UGA and its medical department and the medical college became the first of Augusta’s higher education institutions to become part of the USG.

In the 1950s, overcrowding reached a critical point at the building shared by ARC and JCA. A remedy was found when the U.S. government abandoned the Augusta Arsenal in 1955 and the college acquired part of the property, adding to the footprint over the years and converting the old arsenal buildings to serve educational purposes. The JCA joined the USG in 1958, becoming Augusta College. In 1963, the college became a four-year institution; the first graduate degrees were added in the 1970s and others over the next decades. 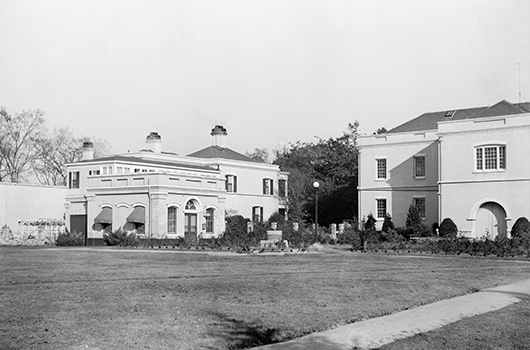 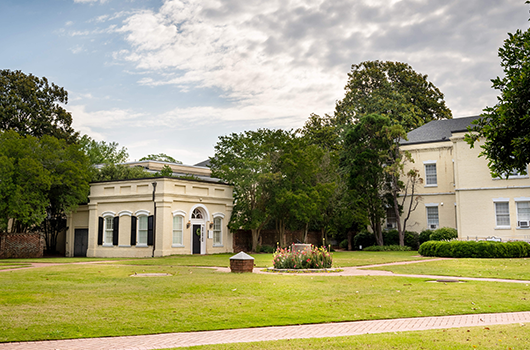 Previously, the Summerville Campus was used as the Augusta Arsenal from 1826 to 1955. Upon moving to the historic site, where several warehouses used to house German prisoners during World War II were located and where the antebellum plantation house Bellevue still stands, the campus transformed existing structures into classrooms and administration spaces.

The arsenal played an integral part of the equipment supply, maintenance and repair for various wars, including the Spanish-American War, World War I and World War II. In 1861, the arsenal was overturned when the state of Georgia seceded from the Union and didn’t return back to federal control until 1865. Payne Hall was used as the arsenal headquarters and is one of the four original arsenal structures still in use today. Noted poet and novelist Stephen Vincent Benét lived there when his father, Col. James Walker Benét, commanded the Augusta Arsenal from 1911 to 1919.

Throughout the post-war years, both institutions grew physically and programmatically. They also made important changes in the student bodies. The medical college began admitting women in 1922, while the junior college was co-ed from the beginning. Both institutions remained racially segregated, however, until the mid-1960s, when the first African Americans matriculated. 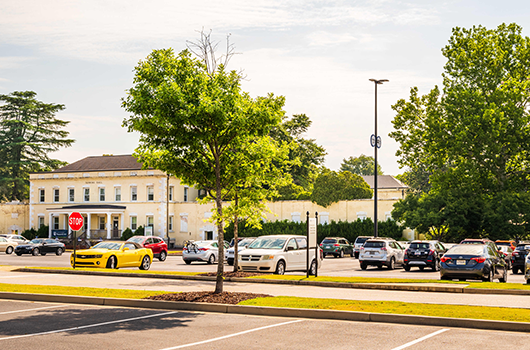 As the institutions continued to grow, so did the need for space for the athletics programs. In 1977, the institution secured from the federal government an additional 240 acres in Augusta's Forrest Hills neighborhood. In 1989, student housing units opened the Forest Hills Campus. Christenberry Fieldhouse, which opened in 1991, became home to the Augusta volleyball, women’s basketball and men’s basketball programs and houses offices for 11 of the Jags’ 13 sports. All administrative and support staff personnel for the Augusta University Department of Athletics, as well as the College of Education’s Kinesiology & Health Science department, are also based in Christenberry. 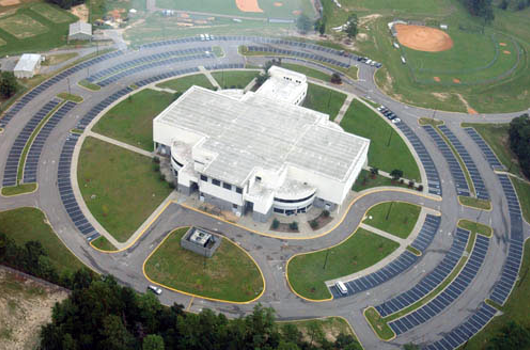 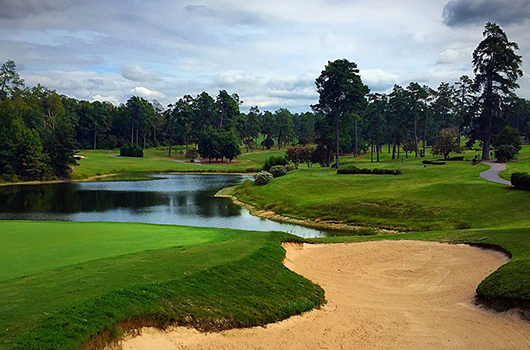 The Forest Hills Campus added a full-size golf course, baseball, softball and soccer fields over the next few decades.

In 2017, Georgia Gov. Nathan Deal announced $50 million in funding to establish the Georgia Cyber Innovation and Training Center in Augusta. This came after the 2013 announcement from the Pentagon that the U.S. Army Cyber Command would relocate from Fort Meade in Maryland to Fort Gordon in Augusta. The center, located on Reynolds Street in downtown Augusta, was designed to promote modernization in cybersecurity through public-private partnerships.

The first of the two buildings, the Hull McKnight Building, opened July 10, 2018. It is named in honor of James M. Hull and William D. McKnight, prominent business and community leaders in Augusta. The second building, the Shaffer MacCartney Building, opened Jan. 10, 2019. It is named in honor of Michael Shaffer, Augusta University's executive vice president of strategic partnerships and economic development, and Teresa MacCartney, former director of the Governor’s Office of Planning and Budget. Both played central roles in establishing the Cyber Center. 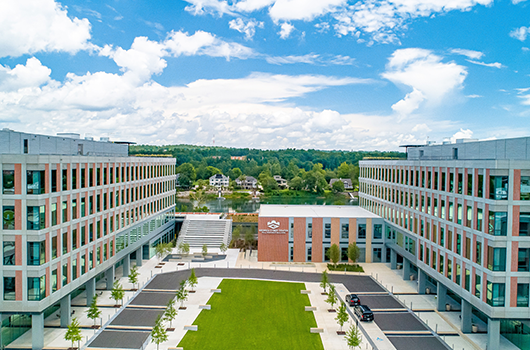 The center is addressing the growing demand for highly trained cybersecurity professionals by connecting academic programs with innovative start-ups and established technology companies. The center also serves as an incubator/accelerator for start-up cybersecurity companies and focuses on research and development by tapping into the assets of Georgia's research institutions. It houses the Augusta University School of Computer and Cyber Sciences and the Cyber Institute.

History in the Making

African American women are almost three times more likely to die from a pregnancy-related cause than white women in Georgia. Black mothers in rural areas of Georgia are at an even higher risk.

In celebration of the first day of Women's History Month on March 1, Dr. Louvenia A. Rainge, an alumna of the Dental College of Georgia, was recognized by the Georgia Senate as the 152nd president of the Georgia Dental Association.

Racial disparities in health care: The toll of COVID-19 on communities of color

Black, Latinx, Pacific Islanders and Indigenous Americans all have a COVID-19 death rate of at least double that of white Americans. Augusta University and AU Health are actively addressing these health care disparities and promoting COVID-19 vaccinations across Georgia and South Carolina.

Racial disparities in health care: A matter of life and death

Over the next year, Jagwire will present a series of stories addressing racial and ethnic health care disparities and the ways Augusta University and AU Health are working to help.

Let's make something great together