Held last year in Groningen, The Netherlands, this year the Transnational Journalism History Conference will be hosted by Augusta University's Department of Communication in Augusta, Georgia, USA.

The conference will be May 28 and 29, 2020, and sessions will be open to the public. For more information, contact Dr, Debbie van Tuyll at dvantuyl@augusta.edu. 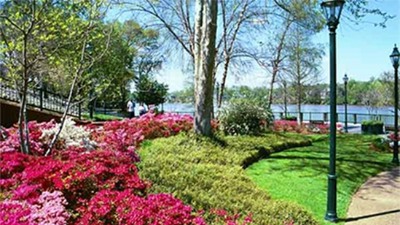 Augusta Riverwalk by the Savannah River

Scholars from nine countries and three continents will present the most current research on an emerging area of journalism history at a conference hosted by the Department of Communication in May.

The keynote speaker is Leonard Teel, professor emeritus at Georgia State University and founder and first president of the Arab-U.S. Communication Education Association. He will be speaking on the connections between journalistic communities in the United States and the Middle East.

Paper topics for the 5th Annual Transnational Journalism History Conference range from information security to labor issues within the mass communication field to the influences of missionary newspapers. c

This is the fifth gathering of scholars who work in the emerging area of transnational journalism history.

“Most journalism history is done within a national context,” explained the communication department's Dr. Debbie van Tuyll, one of the founders of the conference. "However, journalism as a field is not always constrained by national borders."

Instead, van Tuyll continued, journalistic practices, ethics, technologies, stories, even journalists themselves flow naturally across national borders in their work to create news content for their audiences.

Van Tuyll's work in this area focuses on the earliest Irish-American press. One of her most important findings to date is the role Irish-American journalists played in convincing President John Adams that the Alien and Sedition Acts were necessary to quell criticism of his administration. The early Irish-American editors' opposition to the proposed laws, many of whom had fled to America to avoid being charged with treason by the British for their work as journalists in Ireland, contributed to the shaping of America's unique approach to the freedoms of speech and press, van Tuyll said.

In addition to van Tuyll, other conference founders and organizers include Mark O'Brien of Dublin City University, and Marcel Broersma of the University of Groningen (the Netherlands), and Jim McLean of Concordia University (Montreal).

Syracuse University press will publish in June 2020 the first book based on papers presented at the 2016 and 2017 conferences. Van Tuyll, O'Brien and Broersma have a second book in the works that will be a guidebook to transnational journalism history.

The conference will be May 28 and 29 on the Augusta University campus. The sessions will be open to the public. For more information, contact van Tuyll at dvantuyl@augusta.edu.

Above images taken during the 2019 conference in Groningen, The Netherlands. Photos by David W. Bulla.

First image: Gene Allen of Ryerson University (Canada) discusses the relationship between the Associated Press and Reuters in the 1940s at the Transnational Journalism Conference in Groningen, the Netherlands.

Second image: From right, Jordan Stenger and Luis Rocha Antunes, both of Augusta University, and Nancy Dupont of the University Mississippi listen to a presentation at the Transnational Journalism Conference in Groningen, the Netherlands.

Third image: Murray Dick of Newcastle University (UK) presents his paper on the telegraph at the Transnational Journalism Conference in Groningen, the Netherlands.

“Propaganda and Terrorism: A Study of the Evolution of Communication Techniques and Their Use in Waging Information Warfare,” Josh Rutland, Augusta University (undergraduate student)