The Medical Department of the University of Georgia experienced several historical events during Dean William Goodrich's term. In 1926, Loree Florence became the first woman to graduate with an M.D. degree in the history of the school and state. In May 1927, fire destroyed the south wing and caused smoke damage to the north wing of the Newton Building. It resulted in $16,000 worth of damage, and the insurance money led to the school constructing a new animal surgery quarters. The school celebrated its 100th anniversary in 1928 and Dean Goodrich wrote the history of the school to commemorate the event. 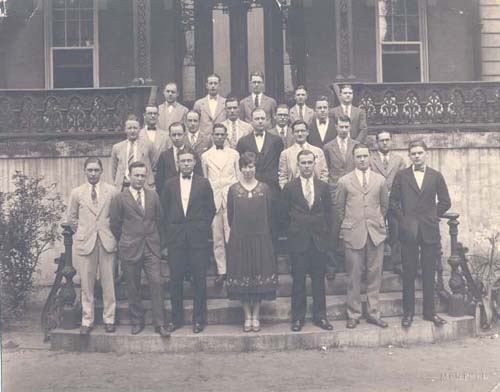 Dean Goodrich constantly worked on acquiring funds for the Medical Department during his deanship. The Rockefeller and Carnegie grants expired in 1926, which meant the school needed money from another source, so Goodrich appealed to the Georgia Legislature. The school needed to add more buildings, buy new equipment, and hire more full-time faculty. The Legislature provided some funds for minor improvements, but not enough for the construction of new buildings. The financial situation of the school deteriorated when the stock market crashed in 1929 and the Depression started. 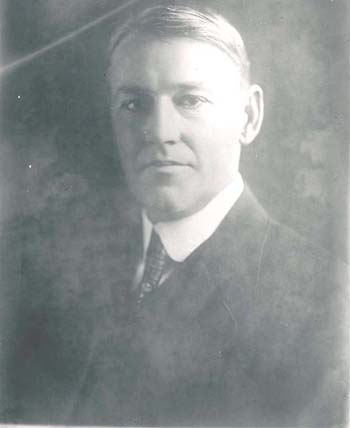 A native of Augusta, Dr. William Goodrich received a Bachelor of Arts degree from the University of Georgia in 1893 and graduated from the Medical Department with honors in 1897. For a number of years, he practiced in Augusta. In 1925 he became professor of gynecology at MCG. After the sudden death of Dean Doughty, Dr. Goodrich was elected dean and served until 1931. In 1928, Dr. Goodrich authored the first history of the college to honor its centennial. In The History of the Medical Department of the University of Georgia, Dr. Goodrich included a brief history of MCG and brief biographies with selected addresses and publications of 10 early faculty members.

In 1939, he was appointed superintendent of University Hospital, a post he held until 1945. At the time of his death, he was chief surgeon for the Georgia and Florida Railroad and local surgeon for the Central of Georgia Railroad. Dr. Goodrich died in a boating accident in 1947 at Port Royal Sound, near Beaufort, S.C.

The Georgia Legislature united all state institutions into the University System of Georgia in 1931 and established the Board of Regents. Within two years, the board assumed complete control of the universities, and in one of its first meetings, it closed eight schools including the Medical Department. The regent's listed several reasons for closing the school: lack of funds, inadequate equipment, not enough classrooms or clinical areas and insufficient number of full-time teachers. The students, faculty, alumni and Augustans rallied to reopen the school. People sent letters, petitions and telegrams to regent's. Gov. Eugene Talmadge, a board member, visited Augusta shortly before the hearing on the fate of the Medical Department, and the public support for the school overwhelmed him. He promised Augustans that he would vote to overturn the decision. He kept his word and deserves credit for saving the medical school. After the Regent's reinstated the Department, they changed the name of the institution to the University of Georgia School of Medicine. 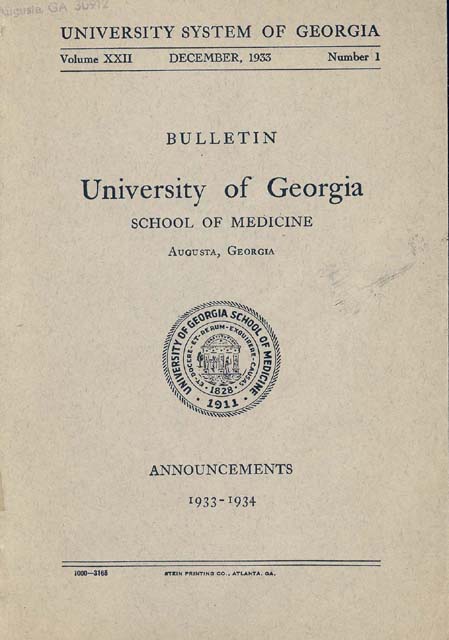 Problems for the institution continued after the reunification with the University System in 1933. The Depression and lack of finances kept Dean William Lorenzo Moss from making the regent's recommended improvements. In addition, Drs. William Cutter and M. Ireland, members of the Council of Medical Education and Hospitals (MEH), inspected the school. Several months later, Drs. Ross Patterson and Fred Zapffe, members of the Executive Council of the Association of American Medical Colleges (AAMC), examined the facilities. In February 1934, both councils released their reports: The MEH removed the school from the Class A listing, and the AAMC recommended revoking the schools membership. Both of the reports were similar to the regent's comments: lack of funds, faculty and appropriate clinical teaching space. The regent's decided a change of deans would improve the situation, and they asked Dean Moss to resign.

The University of Georgia School of Medicine School Bulletin for 1933-1934 is similar to many of today's college catalogs. It announced the one hundred and third session of the Georgia School of Medicine, which started on September 25, 1933 and finished on June 4, 1934. It listed requirements for admission, clinical opportunities, requirements for graduations, and postgraduate work. At this time, the School of Medicine did not require tuition fees from residents of the state of Georgia, which conformed to the regulations governing other branches of the University System of Georgia. However, Georgia residents paid $185.00 each year for laboratory fees. Non-residents' paid $365.00 each year, which included their tuition and laboratory fees. 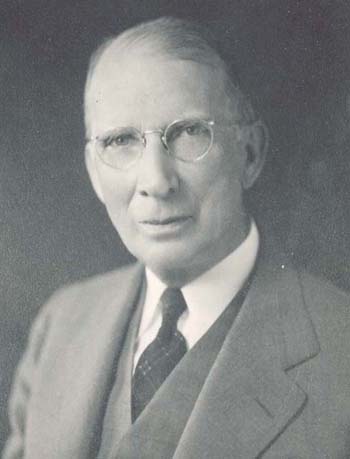 Dr. William Moss, a native of Athens, Ga., received a BS degree from the University of Georgia in 1897 and earned his medical degree at Johns Hopkins Medical School in 1905. Moss spent many years as a teacher and researcher at Johns Hopkins, Yale and Harvard universities, and in 1926 he was acting dean at Harvard's School of Public Health Medicine. After serving as dean, he returned to his research activities. He is best known for his outstanding contributions in the fields of blood classification, tropical medicine and hemorrhagic diseases. His most noted contribution was the Moss System, a classification of blood groups, which he labeled I through IV. The Moss System was widely used throughout the world until modified during World War II. Dr. Moss headed numerous international medical research expeditions in the Caribbean, South America and the South Pacific. He was most interested in expeditions that advanced medical knowledge.