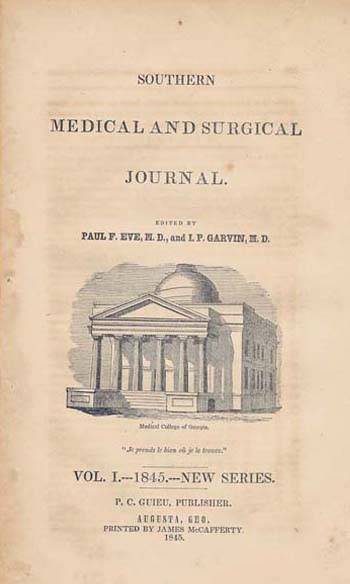 The MCG faculty revived the Southern Medical and Surgical Journal (SMSJ) in 1844 at the request of students with the first issue of the new series appearing in January 1845. Evidence of the growth of sectionalism in the United States appeared in the resumed journal with it focusing more on Southern medicine and diseases. According to the faculty minutes in November 1844, the number of professors missing or late to the meetings forced Dean Newton to impose a $1 fine for tardiness and $2 fine for absenteeism. He also required faculty members to write two articles a year for the SMSJ or pay $20. MCG awarded the first honorary MD degrees in 1846 to Drs. Tomlinson Fort and Alexander Means, who taught chemistry at the school. The faculty purchased Grandison Harris, a slave from Charleston, S.C., in 1852 for $700. He worked for over 50 years for MCG as a janitor and resurrection man. Brothers Henry and Robert Campbell opened the Jackson Street Hospital for Negroes in 1854, which gave students two hospitals to practice clinical skills. The college graduated 73 students in 1856, the largest class before the Civil War. 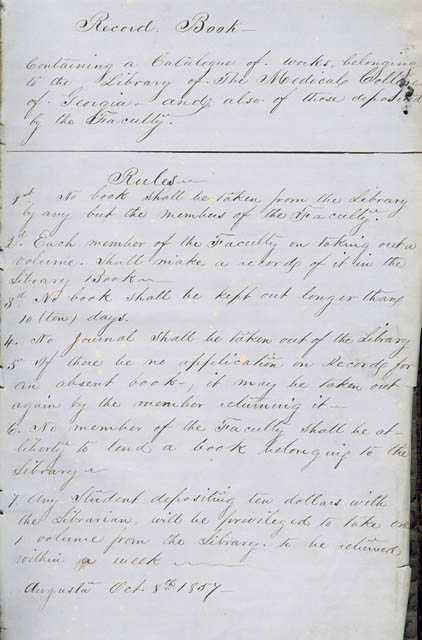 The Southern Medical Surgical Journal (SMSJ) was started by Dr. Milton Antony and was first published in June 1836. After Dr. Antony’s death in 1839, the faculty ceased publication of the journal for a few years. In 1844, they revived it, and the first issue of the new series appeared in January 1845. This photograph shows the cover of the first volume of the new series, which Drs. Paul F. Eve and Ignatius P. Garvin edited.

The first page of the library record book listed its rules, dated October 8, 1857. Only faculty was allowed to check out books free of charge. According to Rule 7, students had to pay ten dollars to the librarian in order to check a book out for a week. From 1838-1844, only nine students were listed as paying the library charge to check out books.

This ticket was for the admission to attend Dr. Newton's lectures on Anatomy for November 1853. Students had to buy tickets in order to attend lectures. Instead of paying to the college directly, each student bought tickets of admission to courses from each of his professors. Price of tickets usually ranged from $15-$25 for each course which resulted in each student paying from $100-$120 for one academic year's worth of lectures. Faculty members turned the ticket money over to the dean. After meeting all expenses at the end of the session, the faculty divided any left over money among themselves as remuneration for teaching. 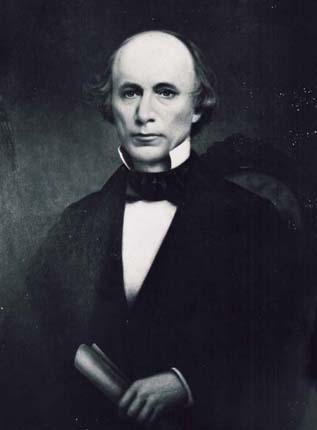 Dr. George Newton was raised in Augusta and earned a bachelor's of medicine from the Medical Academy of Georgia. He then obtained his MD degree from the University of Pennsylvania School of Medicine. He was appointed to the faculty of the Medical College of Georgia in 1833, and served as chair of anatomy and dean of the faculty. Because of his family's financial position, he was the first faculty member to devote his time fully to teaching, administration and civic duties without having a private practice of medicine. He joined his stepfather, Isaac Tuttle, in providing philanthropic care to the orphans of the city and their estates provided for the Augusta Orphanage Asylum (later known as the Newton Building). 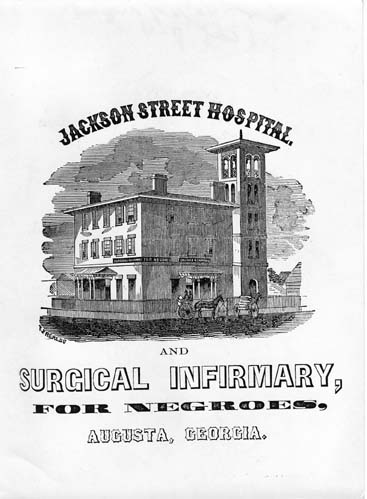 Drs. Henry F. and Robert Campbell built the Jackson Street Hospital and Surgical Infirmary for Negroes in 1854. Located on Jackson (Eighth) and Fenwick Streets, the hospital accommodated 60 to 70 beds. An "ornament" to the city, this three-story facility had a large hallway on the first floor, providing ample lights for operations. With use of ropes and pulleys, patients could be transported to upper-floor rooms from the operating room. Rooms were equipped with gaslights, fireplaces, and hot and cold water. The Jackson Street Hospital operated until the Freedmen's Bureau opened a hospital in Augusta after the Civil War.