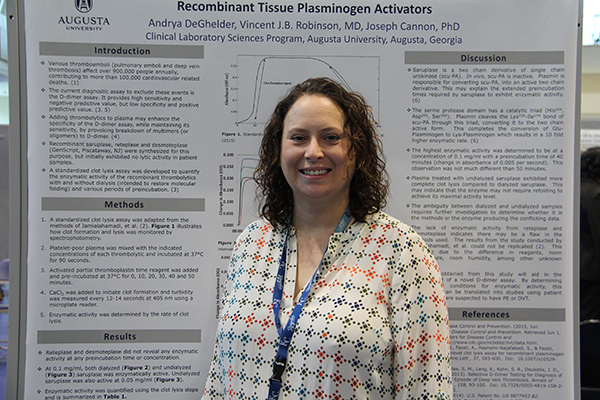 Andrya Pauline DeGhelder was a graduate of Salisbury High School, class of 1997.  She graduated from Southwest Missouri State University with a Bachelor of Science degree.  Andrya also has a Masters of Health Science degree in Clinical Laboratory Sciences from Augusta University, where she graduated in 2017.  Early in her working career, she worked in pharmaceutical research and later as a Clinical Laboratory Technician at Augusta University.  Most recently, Andrya worked at the Charlie Norwood VA Medical Center.

Eight years ago, Andrya developed a rare medical condition called aplastic anemia, at the time of the birth of her son, Kellan.  She valiantly overcame the disease with the help of her brother.  Her experience inspired her to research blood disorders and work towards a cure.  This memorial scholarship is a way for her to fulfill her life’s goal to do just that.

Gifts are tax-deductible to the extent allowed by law, less the fair market value of the benefits received. Please consult with your tax advisor.

Please complete the form below to make a gift.

About Us
Affiliated Foundations
Donor Spotlights